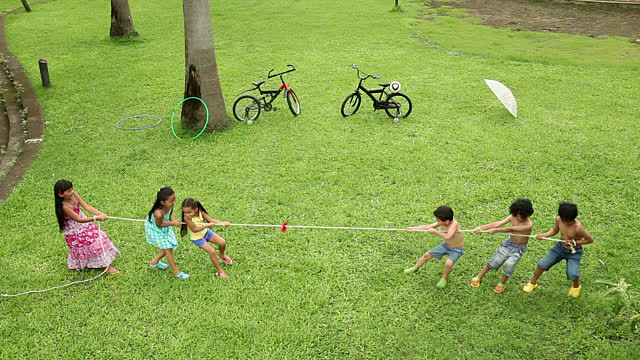 It is a game aimed at children 8 years or older. Students here should be placed in pairs, squatting and facing each other. As soon as the physio gives the signal, the children should start to dump and, at the same time, push with their hands trying to knock each other down. You can only use your hands to pull yourself down. This game is aimed at improving coordination and strength. ¨A funny way to do this is to tie balloons on each child’s feet and try to pop the opponent’s balloons.¨

This game is one of the most popular and fun to do in physical education classes. The children here are placed in pairs, to be able to be the two of the same height and the same weight more or less. In this way, they should try to make a concrete walk in the position of one of them standing by catching the legs of the other by the ankles, and the other supported on the floor with the hands. Then they must exchange the position. It is a game aimed at children over 8 years, which is aimed at improving strength and coordination.

In this fun game aimed at children over 10 years old, students should be placed in pairs. In this way, when the physio makes a  signal, they should sit up and try to move the other off the rope. Then do several repetitions.

This is a game also very popular in physical education classes. It is necessary to form two groups of the children, each standing along a rope and facing each other. A handkerchief will be placed in the middle of the rope, which will serve to see who wins. In this way, two parallel lines are made on the ground, so that the handkerchief lies between them. At the teacher’s signal, everyone starts to pull the rope, and the team that manages to get the handkerchief to their line wins. It is a game aimed at children over 10 years. One of the most fun physical education games.

Form a group of 7 to 11 people, two of them should be placed at each end and have to throw the ball to the participants in the middle, the last person to dodge all the balls will be the winner.

6) Ball Passes in Couple
On the track and placed in pairs, lead a ball and try to pass the partner / knocking it with the foot. (The ball will always roll).

Are you looking for quality, effective physiotherapy treatments and massages? Do you want a personal physiotherapist that values you as a client and offers a wide range of professional services designed around your need?
Website
Search

Angelina Mukherjee
14:18 23 Feb 20
Shari is amazing! I went for deep tissue massages during my pregnancy whilst suffering from a lot of nerve pain and nothing helped. I wasn't sure if the massages could alleviate the pain at first but she outdid my expectations every time! She is also an extremely lovely and kind person. A gem of a find in Belfast!

Ivan Withers
20:03 16 Feb 20
Place is clean,comfortable and relaxing.Kamil is curtious and professional at his job.

A Murray
22:19 02 Nov 19
Had longstanding glute issue but Kamil did a great job. Knowledgeable and competent, he improved my problem far more than any other treatment I have had...and I have tried several. Really pleased.

Tippy Logronio
10:51 15 Oct 19
My husband and I went for a 45min sports massage each with Kamil and we were very pleased with the service he provided. Kamil explained to us what he was doing as he was massaging our backs and necks. He was able to find our problem spots with no bother and we left feeling so much better and relieved. He definitely knows his stuff. Our necks and back felt a lot looser and less sore. We will definitely be going back for regular sessions now. I highly recommend him.

Frank Mcg
16:27 07 Oct 19
Kamil was an excellent therapist, spent a lot of time on my calves and quads. Felt great after

David Simpson
12:07 07 Oct 19
I am yet to find someone who can actually give a proper sports massage to my hamstrings. That was until I went to Belfast Physio and massage and were able to get to parts of my hamstring I didn’t even know existed! Great value for money, will be back!

AH17293 .
09:09 21 Sep 19
I had an amazing massage with Shari this morning. She is very friendly and welcoming, which just adds to the experience. The massage itself is very thorough and she worked through my problematic areas. Shari even showed me an excellent stretch afterwards to help improve my mobility. Fantastic service all round and I will definitely be back asap.

Charlie Mack
22:45 31 Aug 19
Kamil is a highly skilled and extremely dedicated sports injury therapist who has been working on my rehabilitations from my broken hip and femur. I trust him implicitly and I am seeing great benefits from his work. Thank you so much.

Ewa Świętek
17:55 17 Apr 19
I attend regularly for massage sessions with Kamil. He's brilliant. Sometimes I have to go with particular problem for deep tissue massage e.g. last week i went with sciatica and the result was impressive! I felt immediate relief. When I dont need any particular massage I simply go for relaxing one. Kamil is able to perform on request a sound massage which is just out of sight experience! I highly recommend this therapist.

Agnieszka Dworczynska
19:45 16 Apr 19
Always nice and proffesional. I got many times massage from Kamil. I think it's good to know you will get a massage from one of the best students.

Damian Białoń
14:44 16 Apr 19
Kamil treated me with kindness and professionalism. I've had few sessions with him. Alwayse felt better. Thanks Kamil

Maria Białoń
13:45 16 Apr 19
Kamil did a really great work and he learns a lot and quickly, when I had my first appointment with him few months ago I was glad, but now he is much confident and professional. He gained new techniques and he knows how to work on muscles. He is kind and talkative preson. Thank you Kamil!

troglodit616
13:09 16 Apr 19
Professional and really good work from Kamil! My neck and lower back were in pain for several weeks bringing me terrible headache. Fortunately I heard from my colleagues about this place and called for help :) Many thanks Kamil!

Jennifer Mckeown
09:34 27 Mar 19
I went to this lady yesterday with a sore hip which I have had for about six months and today I feel like I have a new hip! I am really amazed. I just wish I had of went six months ago. Thank you so much. This lady is so knowledgeable and found the exact points where the pain was coming from and worked through them. I highly recommend her. Very reasonably priced as well. Delighted with the results after one session. I am going to go for recommended three sessions to loosen all the knots. Xx

Enrique Aparicio Castellanos
19:23 12 Feb 18
Shari is very professional and I am really happy to had been here. 100% recomendable

Stewart Harper
20:18 31 Jan 18
Shari is amazing! I went to shari about 4 weeks ago with a serious knot in my left shoulder (main issue, causing serious pain and tension headaches) After 4 weeks I feel great! Shari was able to find other trigger points in my back that needed treatment that may have been aiding the initial knot. Shari also gave me a stretching plan to work on through the week to help with my issue, this has amazed me as I was never able to touch my toes! But now....... No problem! Shari's treatments are very reasonably priced for the work she puts in as well as being able to talk with her confidently, at the same time having a bit of banter! I also think a nice touch is shari letting me choose the tone of the music, many places would make u lay and listen to what "must" be played to set the relaxing mood but with shari.... We will stick to Bryan Adams 😉😁 Deffo will and already have done recommend shari to anyone who is feeling tense or has muscle pain!
See All Reviews
IN THIS BLOG:
I share my passion by giving health advice and by making publications on topics related to physiotherapy such as injuries and illness. Most publications focus on my patients' injuries.
Recent Posts
TESTIMONIALS IN TREATWELL:

Get Social with Me:
Learn more about me, your therapist, read our +FAQs or book a massage HERE
WE WORK IN BELFAST:
Powered by Embedgooglemaps EN & Intramarketresearch org
LATEST POST:
CALL US: +44 073 972 373 29
× How can we help?